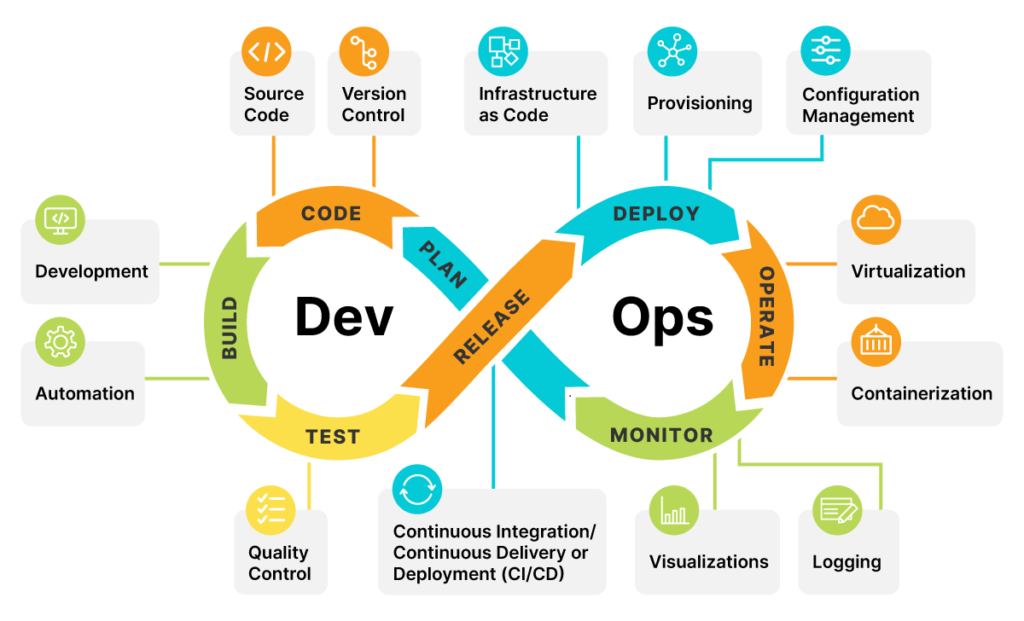 Difference Between DevOps and DevSecOps

DevOps tries to reach the same height by combining development and operations, and the goal is to offer a much better and more organized system to the customers that are better in every possible context.

Since software development began in the late 1940s and early 1950s, developers have been working to improve and streamline how these systems are built.

So, during the rise of the internet and computing, the predominant method for building software was called waterfall development. In a waterfall process, requirements were gathered, and a system was designed that was coded along with that. Some basic testing was done, and after that, it was delivered and possibly maintained until the next version was built.

The issue with this whole process was that first, it was disconnected from its customers, and also, it was very slow. However, in the waterfall process, projects operated on a year’s waterfall cycle, and then there was an annual upgrade to the version next.

Now over the years, technology started to evolve, so the new methodology came at the foot front. And under the very broad label of agile, the processes worked on shorter cycles, so instead of months, there were weeks being taken for completion of work, and it involved talking to customers and taking their opinions into consideration.

This was a massive improvement in how the software was built previously. However, there was still a key piece missing.

Operations Were Not Under Consideration

The precious methodologies for building software didn’t take into account how that software was run.

After you build a system, it must run optimally to be used. It was brilliantly discussed in “the phoenix project by Gene Kim” book.

In this book, the concept from Patrick Debois, who coined the term DevOps took and it came into the mainstream. The concept present in the book was accepted as commonplace in many companies. And many organizations run their It program this way

Predevelopment software development includes building something and then leaving it for others to work on it and maintain it. It could have been their own operation team or even customers. However, this program led and still leads to many problems. This is because you make widely different design decisions when you aren’t worried about how the system will run.

So, by default, the development using these methods tends to optimize for developers’ happiness but not system success.

The DevOps philosophy aims to change that by working closely with the teams that will run, manage or operate the system, and this way, the development oath takes shape.

So here, the design choice is not only made to meet the requirement as written but also with reliability and smooth operations in mind.

Now with all that understanding, you can have a better understating of DevSecOps and DevOps.

DevSecOps expands the DevOps philosophy and tries to break down the barriers between development, operation, and security. If you were under the impression that operations were mostly included in the past, security wasn’t even within the realm of consideration.

It is something that has actually been imposed on the development even though no company wants to build an insecure system. So, it is basically a cultural communication issue that a larger community needs to address.

DevSecOps should be one step ahead in that direction. The goal remains the same as DevOps to start thinking about the overall system and various other areas of concern.

How is DevSecOps Different then DevOps?

It is basically a subset of that, and it mainly focuses on security.   A collection of guidelines and procedures called DevSecOps aids enterprises in safeguarding their software, infrastructure, apps, and data. It is a development of conventional security strategies that emphasize perimeter security in particular.

To increase productivity, development, and operation, the teams collaborate.

The basic purpose of DevOps is the speed that is involved in everyday aspects of the engineering process.

The basic purpose of DevSecOps is to provide security along with providing faster speed of scalability, process, and accessibility.

Focusing on collaboration, continuous integration, and automation to deliver quality software more quickly and bridge the communication gap across teams.

The objective is to offer a safe means of exchanging security choices while upholding the greatest standards of security, control, and speed.

The development focus is simplified

Reduces the risk and legal liability

Spot the issues and bugs early in the process

Reduces the cost of resource management

Well-defined procedures are being changed into more effective processes

The expertise that developers must contribute might initially be somewhat lacking

Developers overwork and there is pipeline friction

DevOps and DevSecOps methods have related capabilities, such as building collective development cycles using automation and constant methods. But while DevOps prioritizes speed of delivery, DevSecOps shifts security to the left.

Initially, using DevSecOps methods can reduce development time while ensuring that your code base is protected from the start. After some training, the team will benefit from increased speed of working and deploying a stable codebase once the contract is fully incorporated into the development methodology.

Excellent Benefits of Mobile Apps for Businesses of All Types

Why Mobile Apps are Important for Your Business?

What are the 3 Common Reasons to Use the Cloud?

What are the Business Benefits of Cloud Computing?